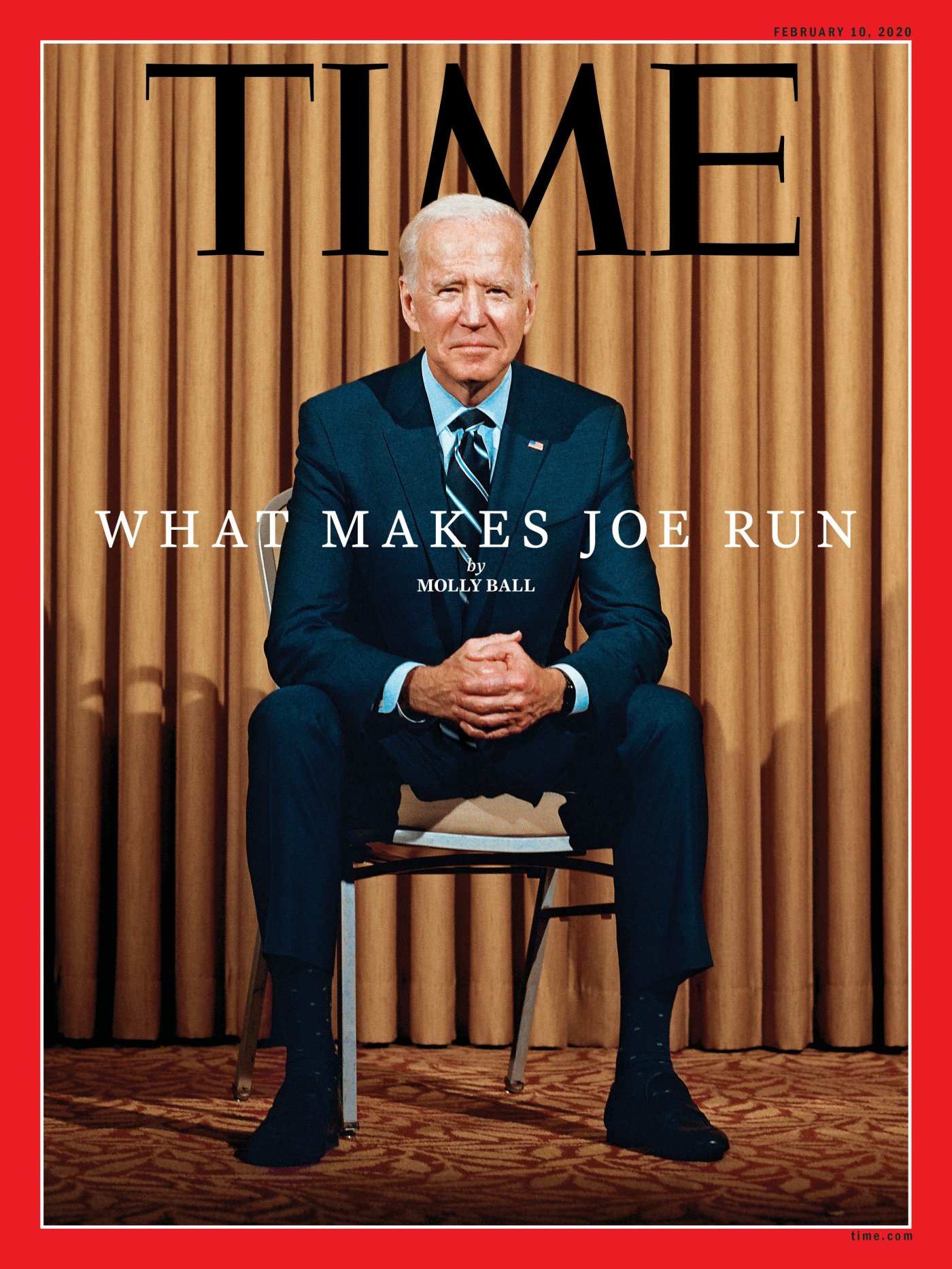 July 1902. Of all the delegates who attended the convention of the Ancient Order of Hibernians in Denver, Colorado, that summer, it was the blue-eyed, Havana-smoking Edward Frances Blewitt who caught the eye of the Denver Post correspondent. Blewitt, whose father was born in County Mayo, Ireland, had been president of the order’s formidable Pennsylvanian branch for a decade prior to his departure for Mexico in 1893. To the Denver Post, the 43-year-old civil engineer was ‘a typical son of Erin’ with the ‘humor of the Hibernian in his cooly meditative eye’.

By the close of the convention, Blewitt and his fellow Hibernians had offered their unqualified support to their fraternal brethren in Ireland, stating that should the Irish ever ‘take up arms against Great Britain’, they would support them every step of the way.

Joe Biden, the Democrat’s presidential hopeful for 2020, is Edward Blewitt’s great-grandson. ‘I am proud to be descended from Irish immigrants, from County Mayo and County Louth,’ he declared in 2016. ‘Being Irish has shaped my entire life.’ On another occasion, he stated: ‘Northeast Pennsylvania will be written on my heart. But Ireland will be written on my soul.’ Indeed, by heritage, Mr Biden is about five-eighths Irish, with the families of Finnegan, Arthur, Boyle, Roche and Scanlon, as well as Blewitt, swirling in his bloodline.

The Blewitts were the most successful of his forebears. They hailed from Ballina, Co. Mayo, a town that happens to be twinned with Scranton, Mr Biden’s ‘very Irish’ hometown in Pennsylvania. His first named ancestor was Edward Blewitt, a brick-maker who supplied 27,000 bricks for the construction of Killala Cathedral in 1827. Edward also appears to have been one of the civil engineers who helped map Ireland for the Ordnance Survey during the 1830s.

Edward’s son Patrick F Blewitt was born in 1832; baptism records of Mayo’s Kilmoremoy parish clocked him as “Patt Bluet”, a resident of nearby Ardagh parish. He set off to sea at an early age and, after serving his time as a cabin boy, he lived for a period in Chile. He later joined his parents and six siblings when they upped from Mayo and sailed for America in 1851.

The elder Blewitt was among the settlers who laid out the streets of Scranton. As an engineer, he was also active in the Pennsylvanian coal industry from an early stage. Patrick duly joined his father and worked as a draughtsman, later serving as surveyor and engineer for various coal and railroad enterprises. In November 1857 he married Catherine ‘Kate’ Scanlon, who bore him thirteen children, of whom three sons and five daughters survived childhood. At about this time, he went to Iowa and opened up the state’s first coal mine at Mt. Pleasant.

The Bleweitts later moved to New Orleans but when the US Civil War broke out, they sagely headed south to Brazil. They returned to Scranton after the war and by 1869 Patrick was a Mine Inspector in two of the Pennsylvania’s biggest coal-mining counties, Lackawanna and Luzerne. He was almost certainly recruited to implement new safety procedures in the wake of a massive fire at the Avondale Colliery in Luzerne County which caused the death of 110 workers, mostly Irish.

Patrick’s report for 1872 shows how hideous it was to work in the Pennsylvanian coal mines. His district accounted for just over 10,500 ‘inside workers’ and nearly 4000 ‘outside’, a third of whom were boys, as well as over 2000 mules and horses. 67 miners were killed in 1872 alone, primarily from falls of coal, slate and rock, while a further 187 were injured. The deaths left 38 widows and 112 orphans. They had mined over 6.5 million tons of coal which meant each death was worth 98,000 tons.

Coal mining in Pennsylvania was very much an Irish business in the 19th century. It was also one of the most hazardous and dirtiest jobs in the US, as every Irishman working the mines knew well. Not only were they working 60 hour weeks but they were paid a fraction of what their Welsh or English counterparts received. Lackawanna was one of the most violent districts with untold numbers of unsolved murder and assault cases every year.

Not surprisingly the mines became a hotbed of discontent and they provided a fertile breeding ground for the Mollie Maguires, a secret society that emerged in the Pennsylvanian coalfields during the 1870s. By intimidation and violence, they sought to pressurize the state’s anthracite mining companies into improving the worker’s lot.

The Mollies also appear to have infiltrated the Ancient Order of Hibernians (AOH), a conservative Irish Catholic fraternal organization founded to protect Catholic immigrants from discrimination and to work towards an independent Ireland. The AOH was in turn closely affiliated with both the Fenians and Clan na Gael.

However, the Mollies’ activities proved too much for the Catholic church and, by the 1870s, priests were refusing Catholic burial to suspected members. The crisis peaked in the late 1870s when 20 alleged Mollies were hanged – ten on the morning of 21 June 1877 – although their trials were later deemed unjust and the dead men were granted posthumous pardons. Ten of those dead men came from North West Donegal.

By the time of Patrick Blewitt’s death in 1911, aged 78, the veteran Irish mining and civil engineer was considered ‘one of the best known engineers in the United States and in South America’ while his ‘original maps of the anthracite regions [were] among the most accurate in existence.’ He had survived Kate by ten years. The Irish link held fast in the next generation with three of their daughters marrying into the Hayden, Gallagher and Roche families.

Patrick’s son Edward Frances Blewitt was born in New Orleans in 1859 and edcuated at Lafayette College, Pennsylvania. He followed the family path to become a Civil Engineer and in 1883 he was appointed Scranton’s chief engineer, a post he held for a decade. During this time he served six years as president of Pennsylvania’s AOH. He subsequently went to the Mexican state of Jalisco where he was Chief Engineer on a $3 million project to build 138 miles of sewer and 90 miles of water piping for the drainage system and water works of Guadalajara.

Edward, who wrote poetry, was also head of the Hibernian Order in Mexico during his time there, not that that counted for much. ‘There are just 18 of us in all,’ he admitted in 1902, ‘but they’re Irish boys, and they stand together for all there is in the blood … As Hibernians down there, we’re for distinguishing our old country by helping each other do the best that’s in us.’

He was the Mexican delegate at the A.O.H. National Convention in Denver in 1902 . Atendees decalred that if ‘Oom Paul’ Kruger, the Boer leader in their war against the British, had turned up, he would have received a warmer reception than any man alive, except the Pope.

Edward Blewitt’s Irish roots were never far away. He chaired Scranton’s St. Patrick’s Day Parade in 1897. Nine years later he founded the Irish American Association (which became the Friendly Sons of Saint Patrick of Lackawanna County in 1939). Recalling his father’s home turf, he was also a member of the the Mayo Men’s Benevolent, Social, Patriotic and Literary Association. In 1907 he stood for the Democrats and became just the second Irish Catholic senator in Pennsylvanian history, retaining the seat until 1911.

He was popular with both coal miners and farmers, having championed much legislation in their respective favours. He also used his skills as a civil engineer to develop the state’s road system, as well as the construction of a canal from Lake Erie to the Ohio River. Another of his legacies was a hospital in Scranton to counter the tuberculosis epidemic that was killing an average of 1,000 Pennsylvanins a year.

Edward was married in Scranton, 1879, to Mary Ellen Stanton with whom he had four children before her death from typhoid fever aged 27. Geraldine Blewitt, their youngest child, was born in 1887 and married in about 1909 to Ambrose Joseph Finnegan.

The Finngeans were from Lordship Parish in the Cooley Peninsula of Co. Louth. The first to reach the US was Owen Finnegan, a shoemaker who sailed from Newry to New York in 1849. Coincidentally Barack Obama’s Irish ancestor, Joseph Kearney, was also a shoemaker. Owen and his wife Jane (nee Boyle) were the parents of James Finnegan, a blind fiddler who married Catherine Roche in 1866, shortly before they moved to Scranton.

Born in 1884 but orphaned by the age of ten, their son Ambrose Finnegan was raised by his maternal uncle, Peter Roche, whose company manufactured signs and bulletin boards. He was a student at Santa Clara College, California, and happened to be in San Francisco when the earthquake struck. He returned to Scranton, married Geraldine Bleweitt and found work as an advertising solicitor for a newspaper.

Ambrose and Geraldine had a son, also Ambrose, an airforce pilot who was killed in the Pacific during World War Two, and a daughter Catherine Eugenia Finnegan, known as Jean. Born in 1917 Jean married Joseph Robinette Biden Sr. in 1941; their son Joe was born in 1942. First elected to the US Senate in 1972, he came to international prominence when he served as Barack Obama’s Vice President for eight years.

All up, it is no mere coincidence that one of Joe Biden’s greatest heroes is Wolfe Tone. Or that he should have connected with Enda Kenny, another Mayo man, when he visited Ireland in April 2016. Or that when he closed his speech at the National Constitution Center in Philadelphia in March 2020, he read the poem, The Cure at Troy, by  the Irish poet Seamus Heaney:

‘History says, Don’t hope
On this side of the grave,
But then, once in a lifetime
The longed-for tidal wave
Of justice can rise up
And hope and history rhyme.’