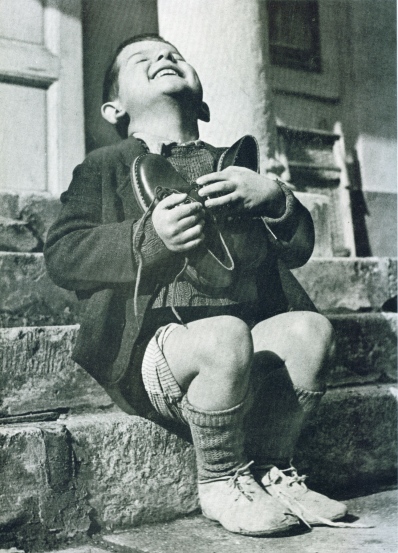 This photograph by Gerald Waller shows a six-year-old Austrian orphan called Werfel moments after he received a new pair of shoes donated by the Red Cross. The picture was first published in LIFE magazine on December 30, 1946 with the following caption:

For many of Europe’s children there was a Santa Claus this Christmas. When a big box from the American Red Cross arrived at Vienna’s Am Himmel orphanage, shoes and coats and dresses tumbled out. Like the youngster (pictured), the children who had seen no new clothes throughout the war smiled to high heaven. But for thousands of other European children there was no Santa Claus. When a boatload of illegal Jewish immigrants arrived at Haifa, Palestine recently, two Polish children (picture to follow) got separated from their parents. Tears filled the eyes of the boy, and his wan sister clutched him protectively. They were later reunited with their parents, but the whole family was shipped to Cyprus.